Offers Villages, hotels and residences in Brescia, a city between nature and history 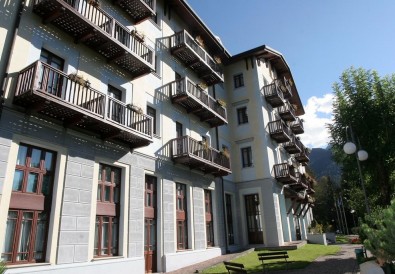 The hotel is located 900 meters far from the heart of Ponte di Legno and offers a wellness center with Jacuzzi, finnish sauna, turkish bath, multi-sensory shower and relax area.

Brescia, called "the Lioness of Italy" for the courage that its inhabitants showed during the revolts of the Risorgimento, is an elegant city and important metallurgical and steel industry center in the high Pianura Padana. The tourist industry also had the chanche to develop thanks to a rich artistic patrimony (such as the ruins of the roman Brixia and the many eighteenth-century churches), a great variety of natural paths (Lago di Garda, Valle Camonica, Valle Trompia) and gastronomic itineraries in the Franciacorta vineyards.

Brescia's historical center is made of museums, monuments and buildings that can be considered architectural masterpieces. Above all there is the Castello Visconteo located on the Cidneo hill: today, it hosts the Risorgimento Museum and the Museum of Ancient Arms. Its fortified tower offers its visitors a breathtaking view on the entire city and hosts events and exhibitions.

The brescian plain extends among the Oglio, Chiese and Mella rivers and is characterized by woods, parks and flourishing farmlands beside a rich patrimony of villas and castles built by noble brescian families during the fifteenth century. Many of these houses are still inhabited and therefore it is not possible to take a tour, but their architectonic and artistic charm makes them an important tourist destination.

Starting from the Iseo Lake and following the Oglio river, there are numerous castles and testimonies of the noble Martinengo family. These castles (one of the most important buildings is the old fortress that belonged to the "Serenissima" republic of Venice) are connected to the municipality of Orzinuovi by a paved cycle path. Part of the fortress of Orzinuovi hosts important events and exhibitions, the other part is the head office of the Regional Park of Northern Oglio. Near this fortress there is the Castello di Barco, surrounded by a flourishing vegetation; it has a brick small tower and some of its areas host a pub for the visitors. Passing through cultivated fields it is possible to reach Padernello, where a majestic medieval castle (1400), recently renovated and open to visits, is located. The Castle of Bonoris in Montichiari, surrounded by a wide park, is the perfect place to spend a pleasant afternoon between history and nature.