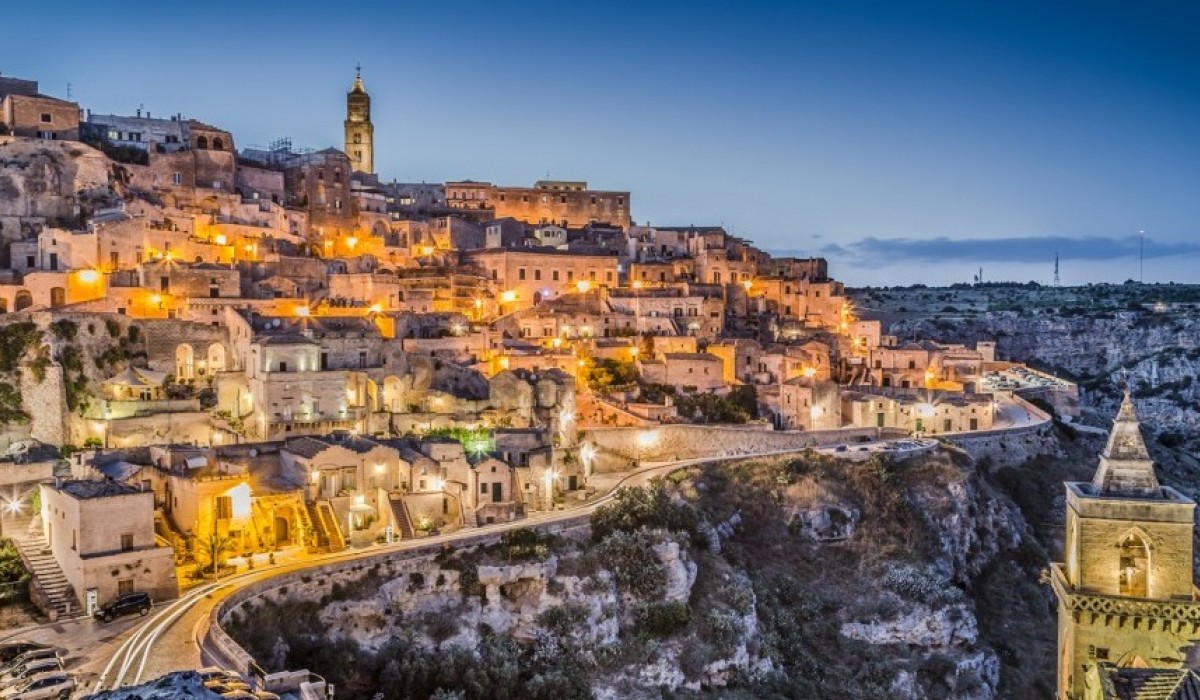 A five-star luxurious hotel in the heart of the Sassi di Matera, european capital of culture 2019 and UNESCO's world heritage, with its peculiar rooms set in the tuff, the Aquatio Suite Hotel is the perfect place for those who want to spend an unforgettable holiday. Each room was designed and furnished by the architect Micheli, who cares about the environmental protection of the area: in fact, he left the original structure of the ancient houses set in the tuff untouched. Luxurious and comfortable rooms with modern and technological furnitures, glass windows, courtyards and terraces where the guests can enjoy their holiday and a breathtaking view. The rooms are equipped with independent heating/air-conditioning system, TV with pay-tv platform, security box (also for your laptop), minibar, Wi-Fi connection, coffee machine, kettle, computerized filtration and recycling system to control the internal air and humidity. Almost every room has an internal path that comfortably leads to the main building with the lobby, the restaurant and the 500-square meter wellness centre. This wellness centre offers a real time-travel experience with its spaces obtained from the ancient original houses; the guests will be pampered by the sauna, the turkish bath and the beautiful heated pool set in stone. 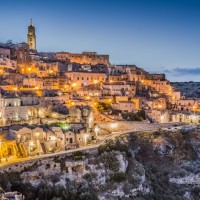 Locality
The Sassi di Matera are a UNESCO's world heritage. With the name "Sassi", we mean the two big districts that, together with "Civita" and Piano", form the historical centre of the city of Matera. The Sasso Barisiano, situated on the road that led to Bari, is full of sculpted gates and decorations and has an underground heart. The Sasso Caveoso, oriented south, is like a theater cavea, with the houses/caverns that follow the declining side of the hill. Inside the two Sassi there are many districts and alleys with picturesque names.

Places to know and visit
The Sassi are probably the first thing that comes to mind when you think of Matera. The ancient residential establishment set in the tuff on the side of the Gravina deep valley was declared UNESCO's world heritage in the 1993. The combination of the houses set in stone, winding alleys, churches, terracings, gardens and tunnels makes the Sassi a spectacular example of architectural complex in a natural context.

The Cathedral of Matera, situated in the highest part of the city, the hill of Civitas, offers a great view on the Sasso Barisano. The structure was built in the thirteenth century on the remains of the benedectine monastery of Sant'Eustachio. In the 1627 the cathedral was dedicated to the Madonna della Bruna and Sant'Eustachio, protectors of the city. The romanic facade of the building has a richly-decorated gate above which there is the statue of the Madonna della Bruna, and a majestic rose window with 16 spokes above which there is the statue of the Archangel Michele defeating the dragon and surrounded by two male figures.

The rocky churches of Matera are dated back to the Middle Ages, when the monasticism began to spread out in the christian community of the time and benedectine and byzantine monks began to occupy the caverns of the Gravina, turning them into places of worship. These mystical buildings set in stone, with their architectural virtuosity and pictorial decorations, are works of art that represent the historical and cultural heritage of the territory. There are about 150 rocky churches all over Matera; in order to protect them, the Parco delle Chiese Rupestri del Materano was established, and it was recognized as UNESCO's world heritage.

The Cripta del Peccato Originale, a few km far from Matera, is a church/cavern located in the wall of Gravina di Picciano and exquisitely frescoed: it is also known as the Cappella Sistina of the parietal painting. The extraordinary benedectine pictorial complex decorating the walls of the vault is one of the most important evidence of the middle-age painting in the mediterranean area.

The Casa-Grotta of Matera, situated in the Solitario alley in the Sasso Caveoso, was inhabited until the 1957 by a family with 11 members. It consists of a single room, half of it excavated while the other half was built, furnished with tools and pieces of furniture of the time. There is the fireplace and the kitchen area, the bed with a mattress filled with maize leaves, the small table with a single dish (for everyone) at its center, the loom, the trough for the mule, the cavity where the manure used for the heating system was collected, the cistern used to collect rain water.

The Palombaro Lungo di Matera is the big cistern dug under Piazza Vittorio; it was used until the first decades of the last century to collect drinking water. It owes its name to "plumbarius", latin word used to refer to those who covered the water mains in lead and, more generically, to everything regarding hydraulic activities.

The natural areas of Matera, the reserves, the parks, the protected oasis that characterize the entire territory of Basilicata are the perfect combination of nature and culture. Rare animal and vegetable species live here, and many important findings are preserved.

Services for our guests
Check in from 17:00 - Check out within 10:00.
Sunday/sunday stays (starting with dinner and ending with lunch).

Surcharge services and activities
Trekking or bike tours in the canyons.
Visit to the Sassi in a hot-air balloon.
Gastronomic and cultural itineraries.
Customized/group excursions.
Visits to museum and ancient castles.
Transfer service from/to the airport.
Sports activities.

Restaurant
The Aquatio Suite Hotel has an internal bar where you can relax after a long day spent exploring and discovering the beauties of this area, and taste the delicious products of our coffee bar, aperitif, snacks, wines and sparkling wines. There is a buffet table with local and international ingredients at breakfast. The restaurant has an outdoor area where lunch and dinner are served and where the guests can eat dishes that have the typical tastes, smells and colours of Basilicata. Live a unique experience dining by candlelight under the stars, in the heart of Sasso Caveoso and surrounded by history, tasting the delicious typical cooking and sipping an excellent wine.