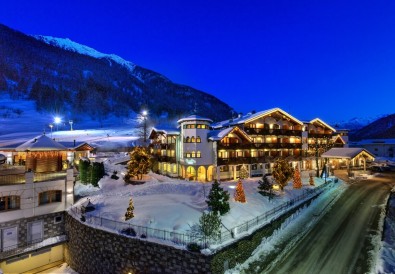 In the Stelvio National Park, the hotel is located a few steps from the center. 3 km from Pejo lifts (Pejo 3000 cableway), 8 km from Marilleva 900 lifts, both reachable by free ski bus. Com-prensorio ...

Municipal capital, center of major services of public interest, it is located in the presence of the peaks of Cadine, Punta Taviela, and Monte Vioz (all above 3500 meters) towards the valley floor.
Sports lovers will find many routes and itineraries in Pejo: in the Cevedale group, in the Stelvio National Park, in the biotopes of the Red Chain, in the Lungo, Pian Palù, delle Marmotte, Covel and Careser lakes.
Not far from Pejo are the ski areas of Tonale-Presena and Marilleva. At the entrance to the town is the headquarters of the Stelvio National Park, a park that extends over the entire natural paradise of Ortles-Cevedale. Towards the end, however, there is the old church dedicated to Saints Philip and James, built in 1332 and enlarged towards 1450, consecrated in 1497, enlarged and consecrated again in 1588, ruined by a fire and still restored in 1804. The north wall of the church is covered with frescoes and decorations, the only solandro example of this size. The cycle is the work of Giovanni Angelo Valorsa da Grosio, in Valtellina (1643). Pejo is also known for its mineral waters. The spa, at 1,390 meters above sea level, in the Stelvio National Park, treats respiratory, circulatory, rheumatic and dermatological diseases, also offering aesthetic treatments. The waters flow fresh, pure and clear from three sources: the Fonte Alpina, the Antica Fonte and the Nuova Fonte.