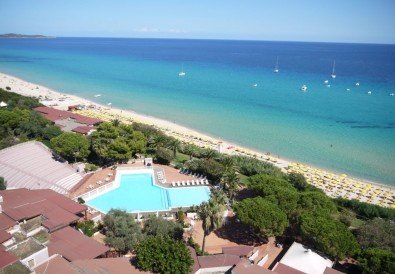 It is the ideal place for a family holiday, a four-star village on the sea of Costa Rei with 6 tennis courts, 2 multi-purpose five-a-side football/basketball courts, bocce court, freshwater pool for ...

Costa Rei, also known as Costa Rey, is a maritime fraction of Muravera on the southeastern coast of Sardinia. This locality extends for about 10 km, from Porto Pirastu to Cala Sinizas, and has its centre at the base of Mount Nai (200 meters high) that gives its name to the surrounding area. The urban centre is divided in the areas of Sa Perda Niedda, Sa Murta (at the centre), Le Ginestre, Gli Asfodeli, I Ginepri (south), Turagri, Rei Marina and Rei Plaia (north). The tourist centre of Costa Rei developed at the and of the 1960s thanks to the two belgian builders Heimann Tallier and Edgar Yvan and the german Bastian Barthelmess. The most famous monument of Costa Rei is the "countess house" on the coast, the most ancient local residence: it is not easily reachable but from here it is possible to enjoy a breathtaking view on the entire locality. It is visited by many tourists, especially young people, fascinated by this abandoned house and the numerous legends that surround it.

Popolated mostly during the summer, Costa Rei is the favourite destination of many tourists that will have fun in its three squares: Piazza Rei Marina, Piazza Italia and Piazza Sardegna. One of the most characteristic beaches of Costa Rei is the one with the "scoglio di Peppino", Peppino's rock, in the locality of Santa Giusta. The island of Serpentara can be admired on the horizon. Besides the many free beaches there are picturesque inlets and an uncontaminated crystal-clear sea. In 2009, Costa Rei was awarded with the "Travel blogger award" by "Lonely Planet", the prestigious publishing house of tourist guides that included it among the 10 most beautiful beaches in the world.