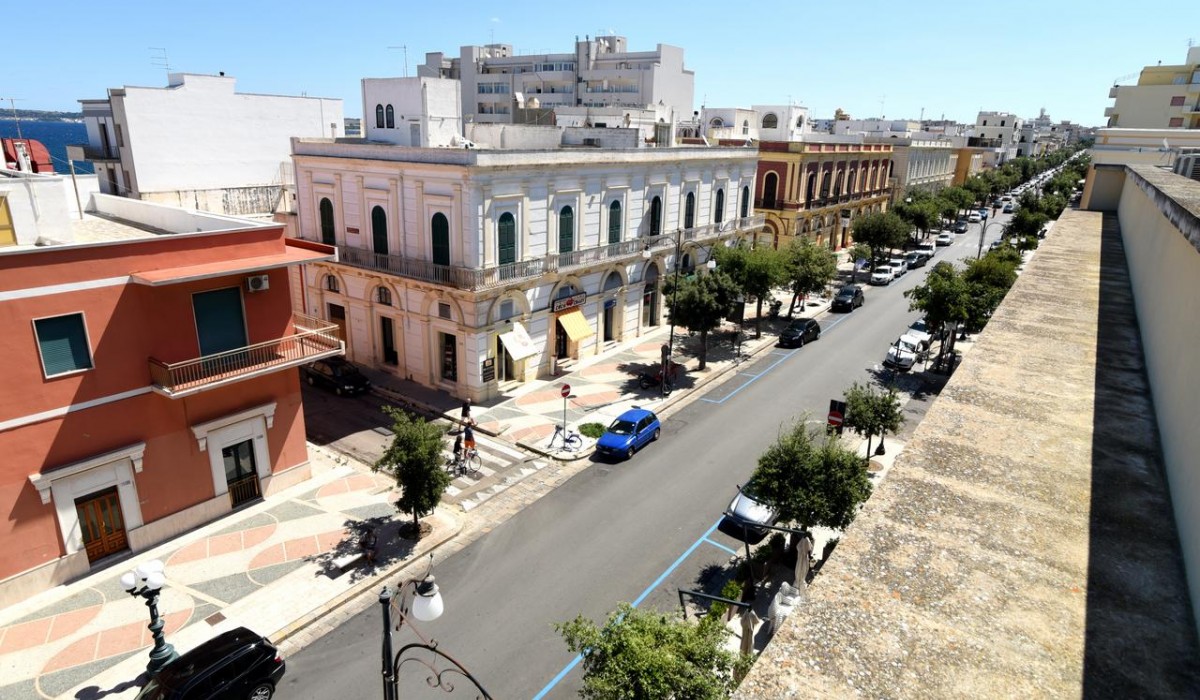 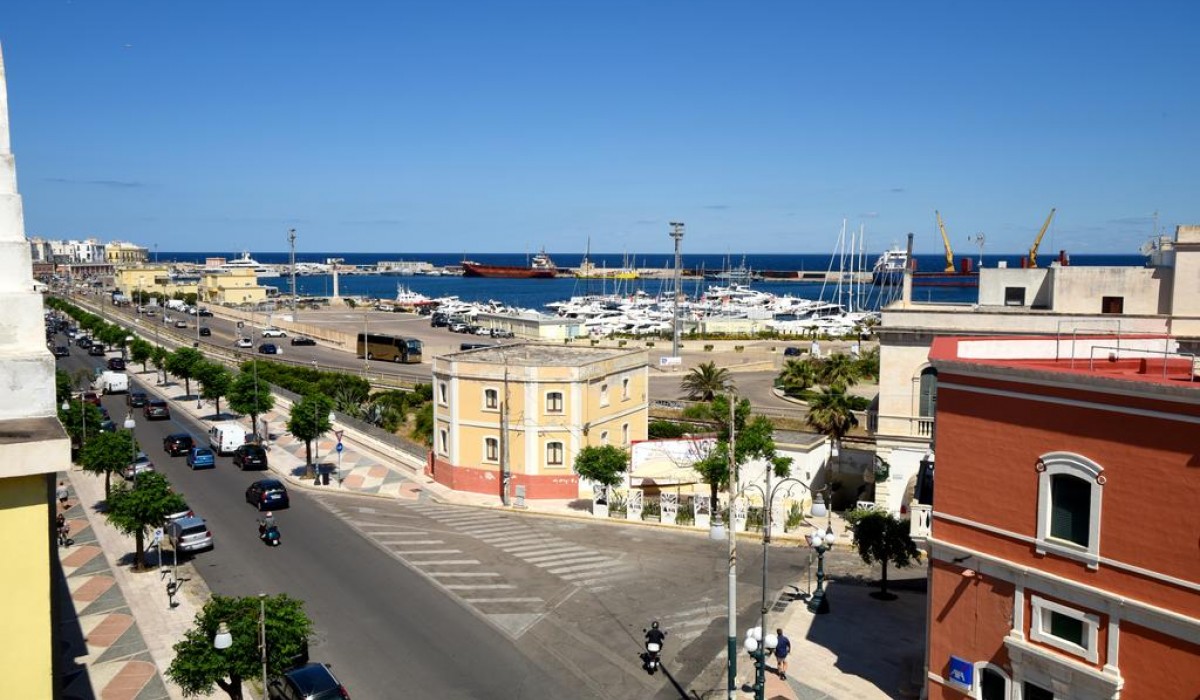 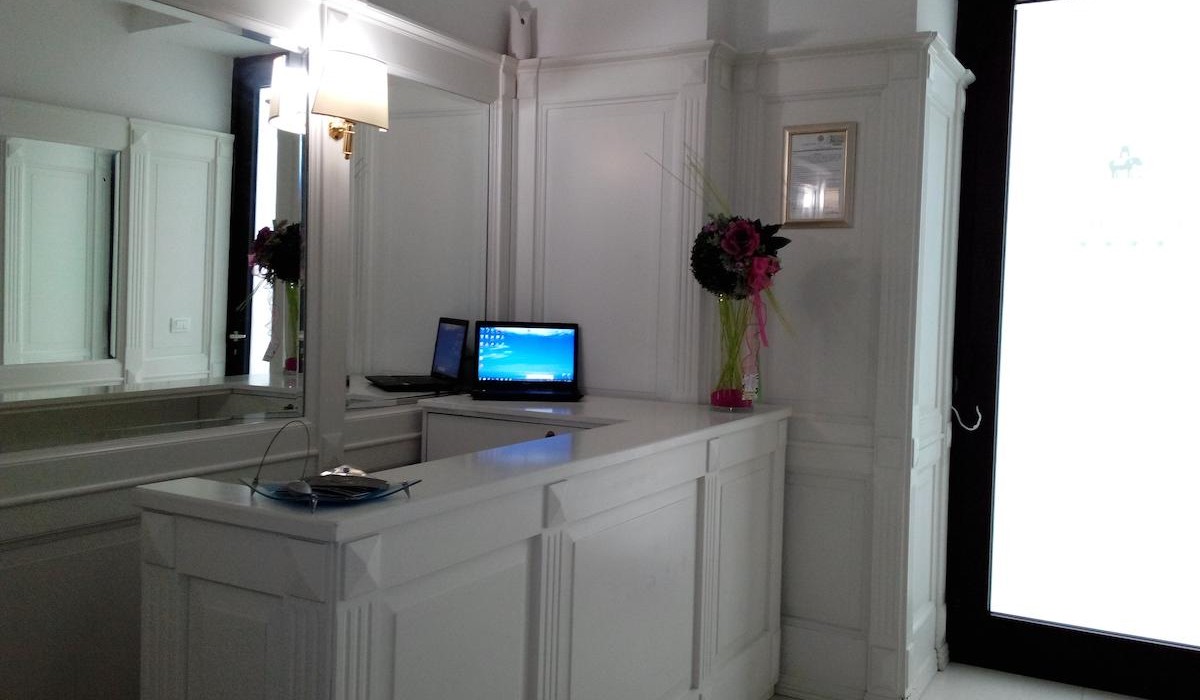 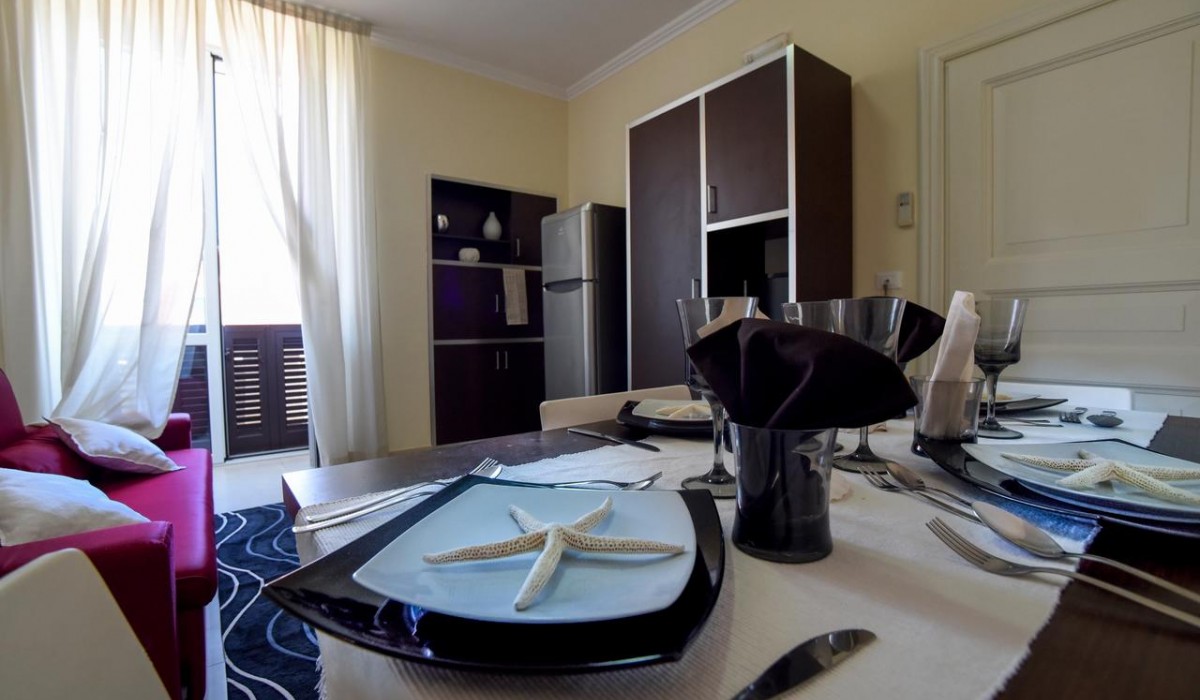 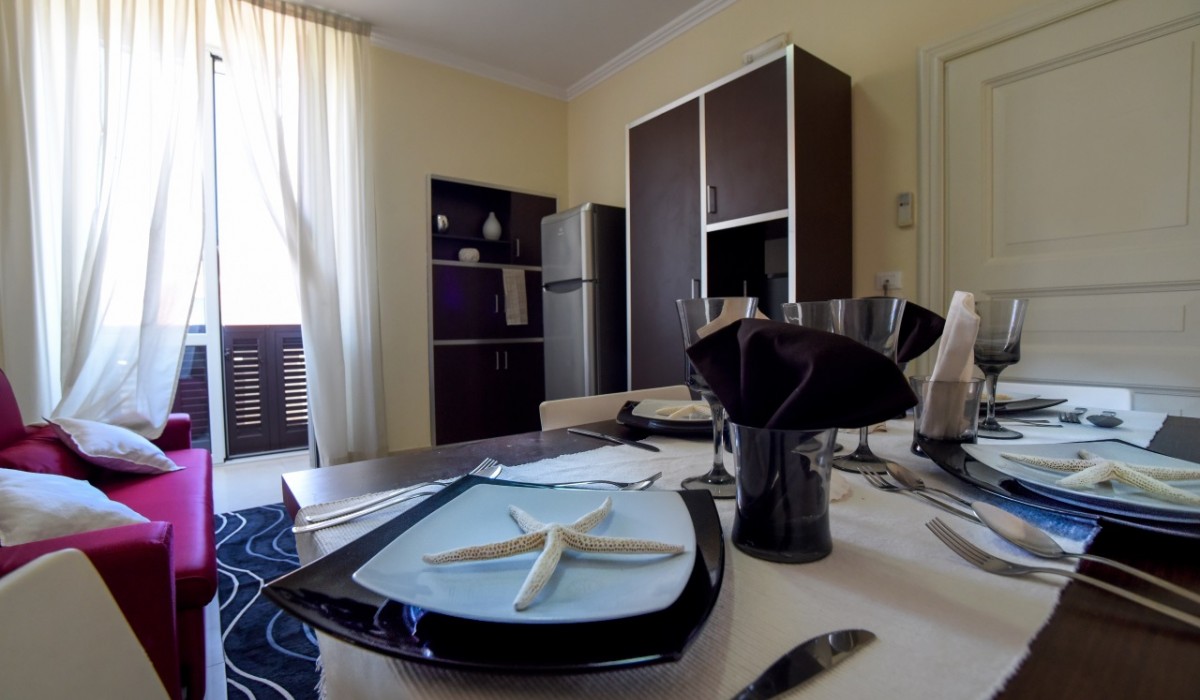 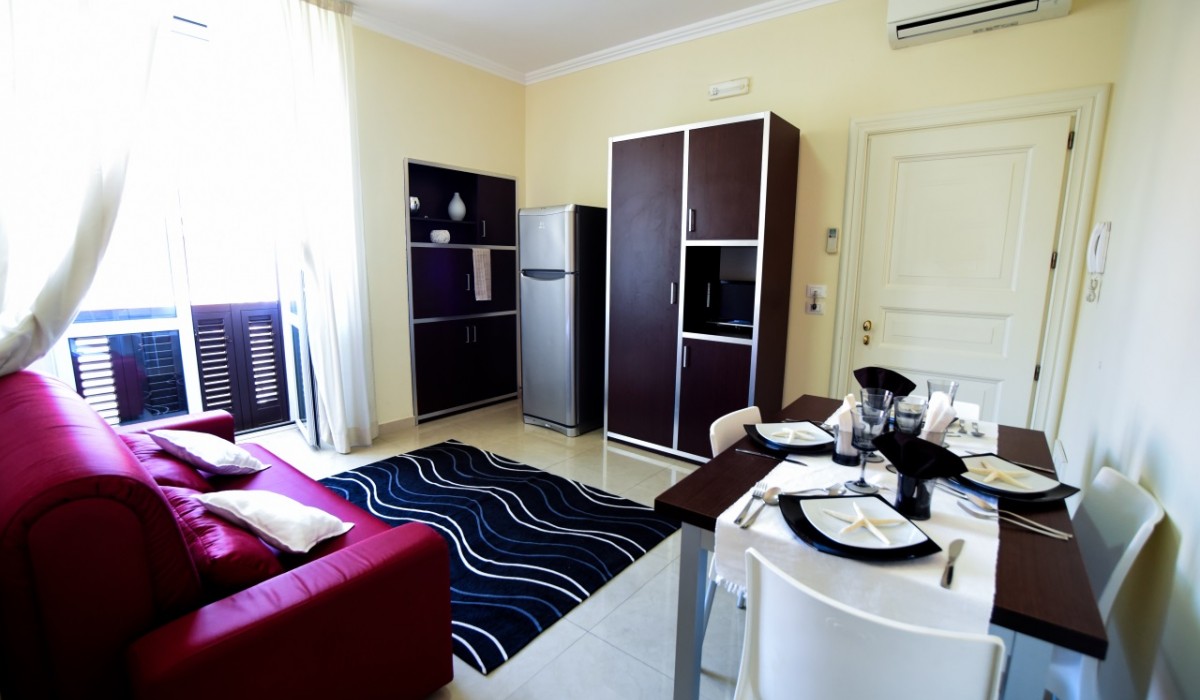 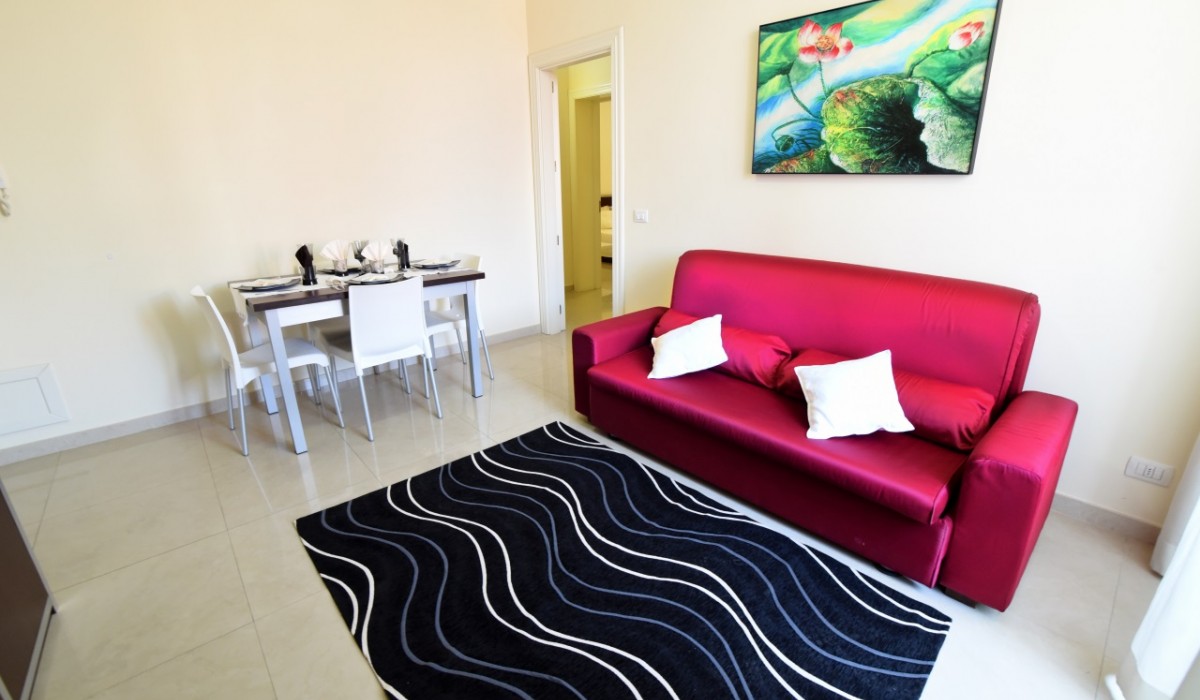 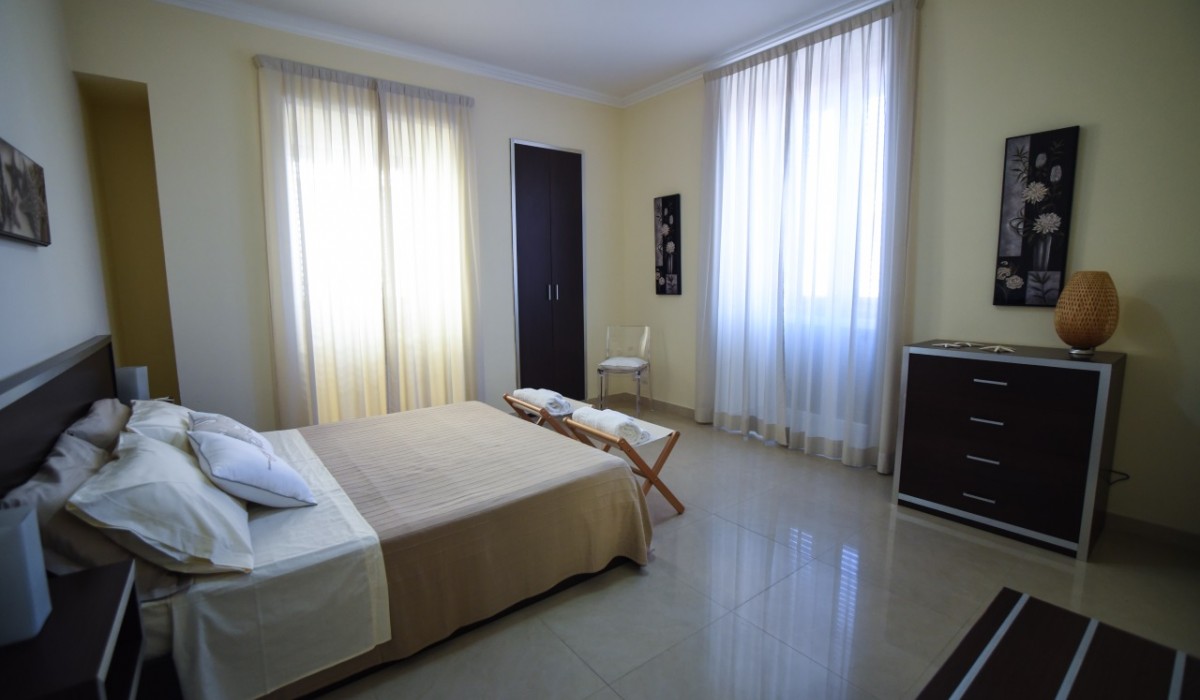 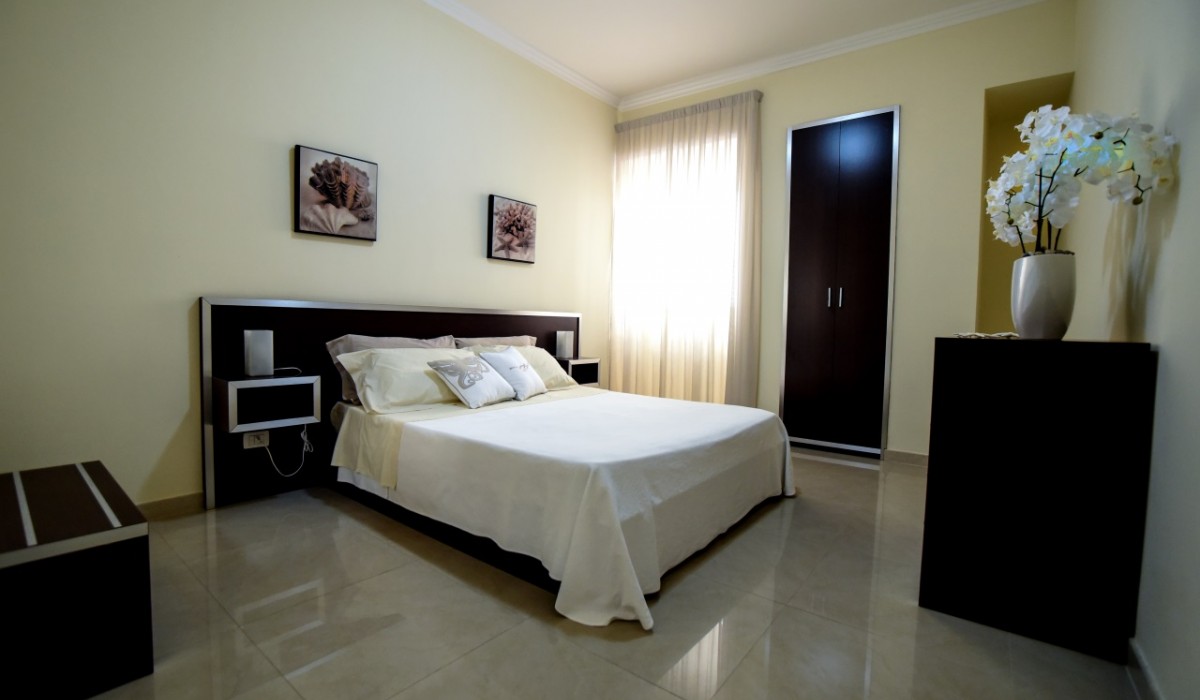 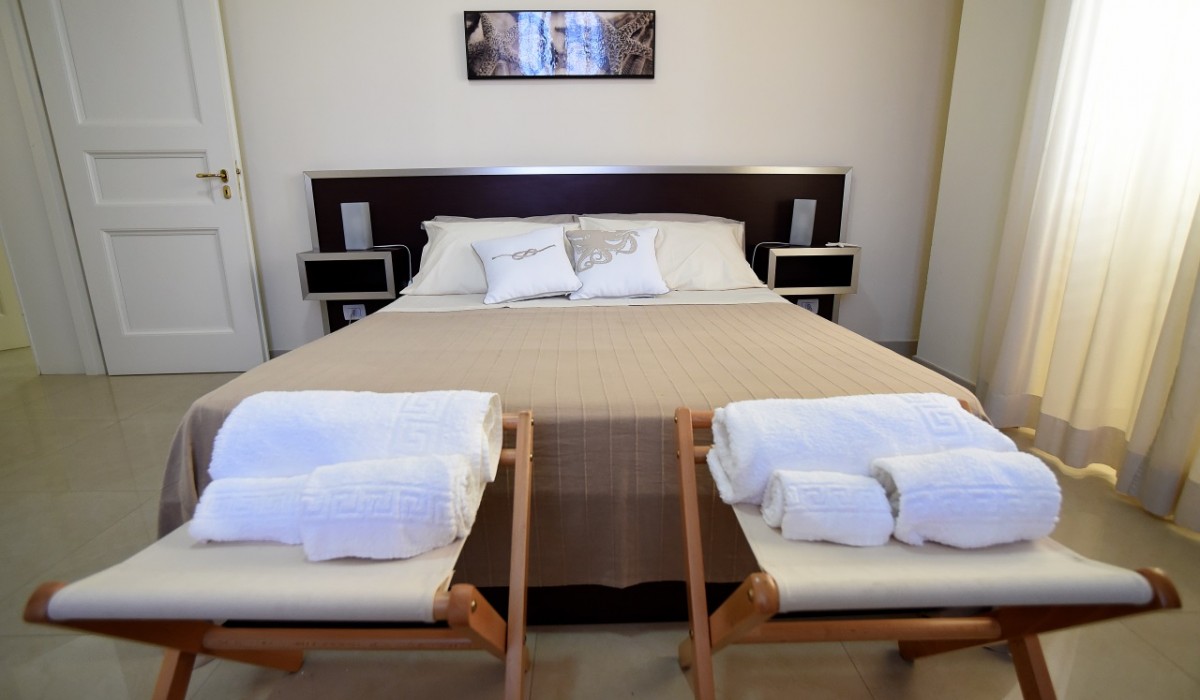 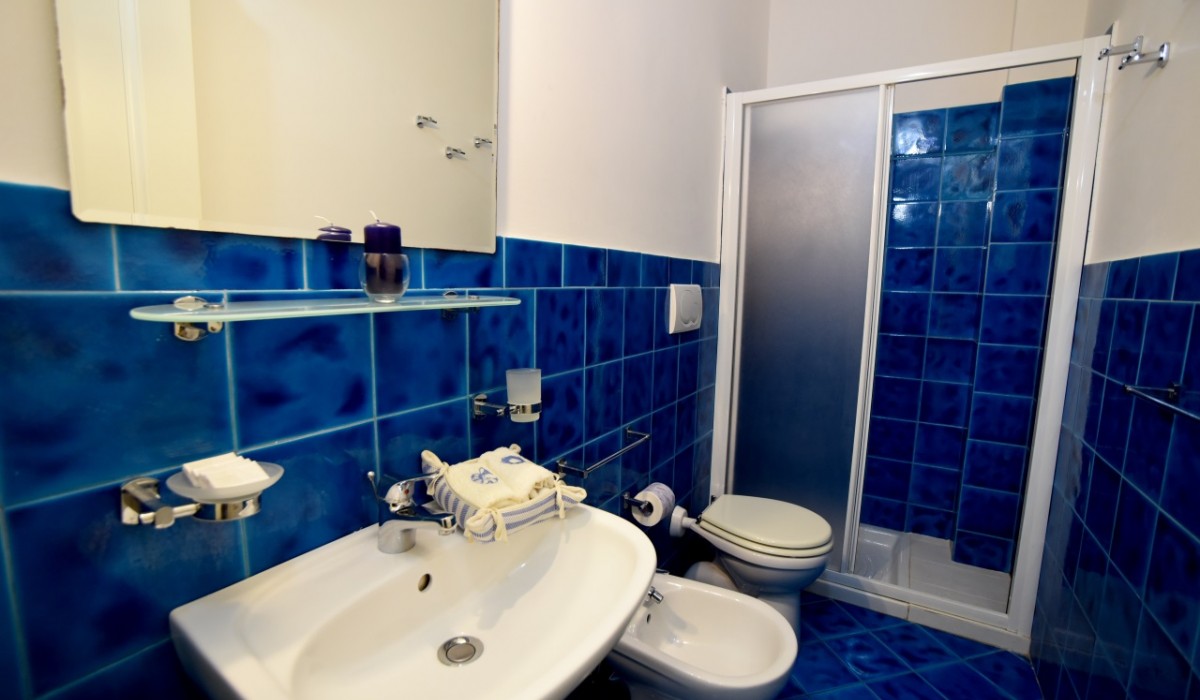 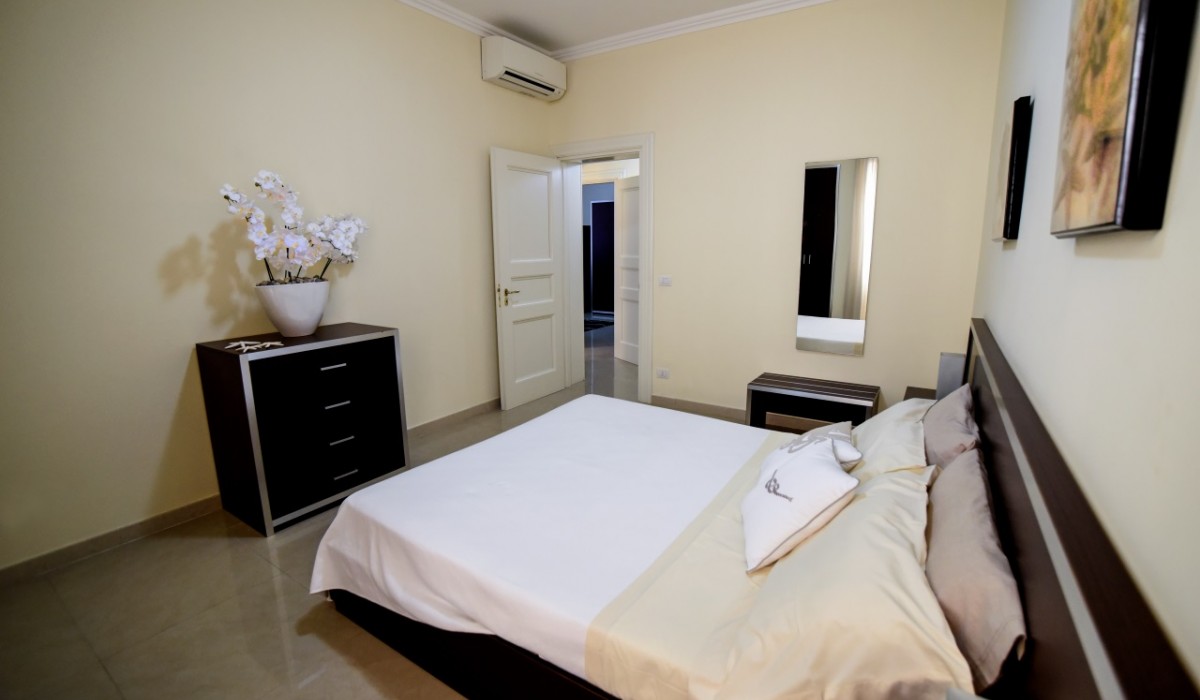 The Residence Palazzo Mongiò, Gallipoli, in the heart of Salento, was born from the restoration of a wonderful ancient noble castle belonging to the Mongiò family. The residence consists of 12 wide and sunny apartments (two-room apartments, three-room apartments and an attic) located on two floors connected by an elevator, 200 meters far from the historical centre, on the main street of the city, surrounded by the sea and only 900 meters far from the beautiful "Spiaggia della Puritate". 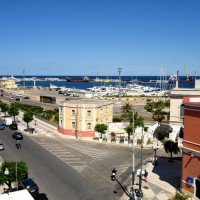 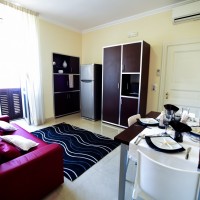 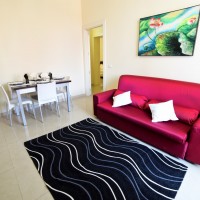 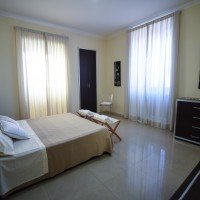 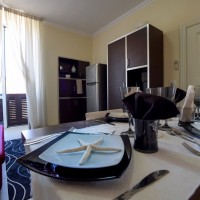 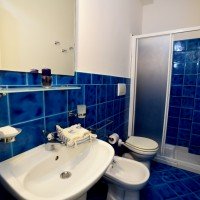 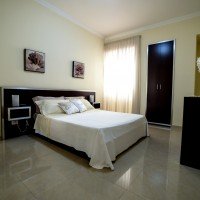 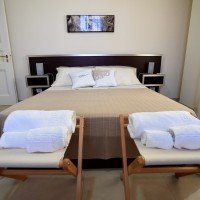 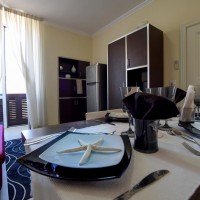 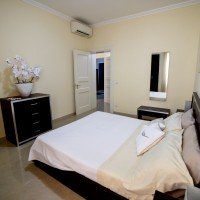 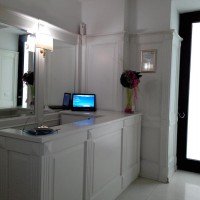 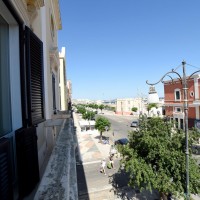 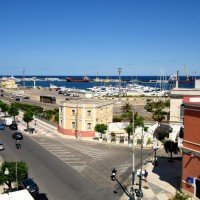 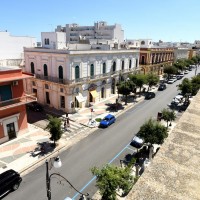 Locality
Gallipoli, known as the Pearl of the Ionian sea, in the province of Lecce, is located on the western coast of Salento and is divided into two areas: the historical centre on a calcareous island and the new village, connected to the island by a bridge. Thanks to its important religious and civil baroque architecture, Gallipoli appears in the Tentative List of the UNESCO, waiting for its possible recognition as a world heritage.

Places to know and visit
"Basilica Concattedrale di Sant'Agata", a seventeenth-century baroque building located in the city center and on the highest part of the island. It is one of the most important baroque monuments in Salento. There are recesses with stone statues of Sant'Agata, San Fausto, San Sebastiano, Santa Marina, Santa Teresa d'Avila and the busts of Sant'Agostino ad San Giovanni Crisostomo. The inside has three naves with precious altars and numerous paintings which make the cathedral look like an art gallery.

The Church of San Francesco di Paola, built in 1621 on the town walls in front of the harbour. There is only one nave inside, divided from the presbytery by a majestic triumphal arch covered in coloured wood. In the presbytery there is a main altar with a painting by Romualdo Formosa, representing the Death of San Giuseppe. In the nave, there are three altars dedicated to the owner, to San Michele Arcangelo and to San Liborio.

Church of S. Francesco d'Assisi. Its most ancient part is dated back to the thirteenth century. The facade develops on two levels: on the first level there is a gate introduced by a colonnade, on the second level there are two protruding features and a concave central part. The inside has three naves with ten baroque altars along the side of the walls.

The Church of Santa Maria della Purità, built in 1664. The facade, delimited by two pilasters and completed with a slightly protruding cornice on which there is a fronton with two side pinnacles, is characterized by three majolica-panels that depict the Madonna della Purità, San Giuseppe and San Francesco d'Assisi. The inside of the church, full of sumptuous stuccos, has a marble altar on which there is a painting by Luca Giordano depicting the Madonna della Purità between San Giuseppe and San Francesco d'Assisi.

The Sanctuary of Santa Maria del Canneto is located near the bridge that connects the old town on the island to the new village. It overlooks the Seno del Canneto, old harbour of Gallipoli, and was built during the second half of the seventeenth century on a preexisting sacred building (dated back to 1504). A portico with three frontal arches and two side arches introduces the three naves covered by a precious wooden ceiling coffer.

Palazzo Pirelli, located in front of the Concattedrale, was built during the sixteenth century. It was renovated with a baroque style and enriched with a gate and a loggia. The entrance is through the sixteenth-century catalan gate. The inside is richly decorated as we can see on the ceiling of the old entrance, which was turned into a pharmacy in 1814. The ceiling is full of sculptures, friezes and cornices that converge in the vault. At the center of the vault there is a representation of the meeting of two mythological deities: armed Minerva (the wisdom) with an owl and a rooster - her favourite animals - at her feet, and Fortuna who holds a cornucopia in her hand (symbol of prosperity) and a ship's wheel (to direct men's fate). These symbolic elements remind us of the typical sixteenth-century motto: wisdom and fortune must supervise the government of the city.

Palazzo Assanti-Aragona, in Via Giuseppe Ribera, in the historical center of the city. It belonged to one of the noblest families of 1500; this family existed since the twelfth century, as the writer and abbot Francesco Camaldari tells us. The customers of the castle were Angelo Assanti and Antonio; one of them married a girl from the Aragona family, as the emblem on the southeastern side shows; then De Tomasi became the owner, after he married the last survivor of the Assanti family, Antonia. Their son, Filippo, born in Gallipoli, inherited the castle and was appointed count in 1709. Its characteristic feature was an olive-press completely dug into the stone.

The Palazzo Tafuri is the most characteristic example of the baroque style in Lecce; it was wanted by a jurisconsult, a law expert from Matino. The palace was built with a fine baroque style and exquisitely decorated with oval windows. The balconies remind us of the spanish style. It currently belongs to a colonel since the Tafuri sold it in the nineteenth century.

The Palazzo del Seminario was wanted by the Trent council, more precisely by the bishop De Ruenda. Then, the bishop Serafino Brancone continued the project. The municipality of Gallipoli contributed to its building with a 300 ducats donation and the selling of the goods belonging to the monastery of San Mauro di Sannicola. On the 16th March 1752, the master Adriano Preite da Copertino started to build the castle, which was completed in 1756 and inaugurated in 1760 by the bishop Ignazio Savastano. The outside of the structure is finely decorated with a baroque style, from which the other castles in Gallipoli took inspiration (such as Palazzo Doxi). Since 12th July 2004, it is a diocesan museum: there are many paintings, treasures and ecclesiastical objects dated back to 1600-1700, and silver busts of Sant'Agata and San Sebastiano, Gallipoli's protectors.

Palazzo Pasca belonged to the noble Pernetta family and later to the canon Francesco Pasca, who celebrated Mass in a private oratory. Its structure is characterized by a big balcony and a main gate that was built with a baroque style.

Palazzo Romito is surely one of the most charming and characteristic castles of Gallipoli as it is full of busts, pillars, buttresses and rococò balconies. It belonged to the noble and historian Bartolomeo Ravenna and is located in a place dedicated to the nuns who lived in the castle.

The Spiaggia della Puritate (the beach of purity) in the historical center is a small beach between the bastions of the old town. In the northern part of Gallipoli there is Torre Saba, where the coast is rocky, characterized by a sighting tower and tourist villages (such as Acquasplash, Rivabella), with a wide inlet that expands all the way to the enormous fine-sand beaches of Padula Bianca, where the most important beach clubs of the northern coast are located; the beach ends with Lido Conchiglie, near the municipality of Sannicola. The southern coast, from Lido San Giovanni to Baia Verde, is characterized both by sand and rocks. Here we can find the most famous night clubs and beaches of the area and an emerald-green sea. Then there is Li Foggi, inside the regional natural park of Sant'Andrea, and the coastline of Punta Pizzo, full of hotels and tourist villages, estuary of the Canale dei Samari. Punta della Suina is another beach of the reserve: it can be reached passing through a pinewood and that leads to its crystal-clear water, rocks and some small sandy beaches. The last wide beach is the Pizzo, characterized by a sixteenth-century tower.