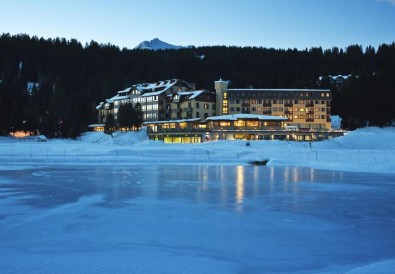 The TH Golf Hotel overlooking the ski slopes, not far from the famous Madonna di Campiglio. Immersed in a context of unique beauty, it is a highly sought-after destination for holidays in Trentino. 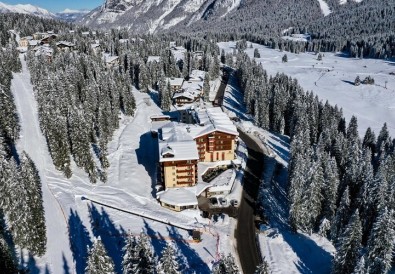 In the heart of Val Rendena, between the Brenta Dolomites and the Adamello and Presanella glaciers, Madonna di Campiglio is located at an altitude of 1,550 meters in the province of Trento. From the second half of the nineteenth century it was a highly sought after destination for summer stays by the nobility and the rich bourgeoisie, as evidenced by the assiduous frequentations of Princess Sissi and Emperor Franz Joseph. Today loved by skiers and winter sports lovers thanks to its 60 kilometers of slopes and 20 ski lifts that make it one of the most renowned ski resorts in Italy. The most famous slopes are the Dolomitica and the Schumacher Streif. The first is the longest run, the second instead reaches 70% gradient in some points. Then we find the Canalone Miramonti slope, a spectacular illuminated night attraction that can be traveled until the wee hours known as the "ski ladder" and represents one of the most prestigious stages of the World Cup. In Campiglio we also find the Ursus Snowpark, one of the 5 most important snowboard parks in the Alps.

What to see and what to do in Madonna di Campiglio

1.Excursion to the 5 lakes, one of the most pleasant tourist experiences for those who love being totally immersed in nature. The 5 lakes excursion includes: Lake Ritort, Lake Labin, Lake Serodoli, Lake Gelato, Lake Nambino
2.Visit the Hofer Hall inside the Des Alpes hotel, beautiful decorations made by Hofer which include a fantastic canvas depicting the Madonna who appeared to some shepherds on Monte Spinale, as well as portraits of Francesco Giuseppe and Sissi
3.Via delle Bocchette, one of the most panoramic via ferratas in the Dolomites
4.Church of Santa Maria Antica
5.Adamello Natural Park, a protected area of Trentino Alto Adige which extends for about 620 square kilometers.

How to get to Madonna di Campiglio

By train
Reach the station of Trento and then continue with the buses of the company Trentino Trasporti in the direction of Tione-Pinzolo-Madonna di Campiglio.