Pearl of the Tyrrhenian sea 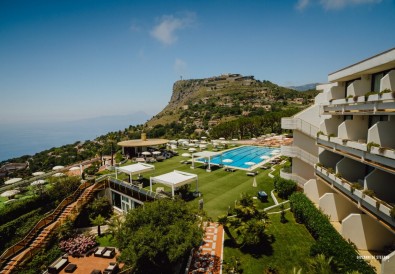 The Grand Hotel Pianeta Maratea is located in a suggestive position, along the hill of the famous Statue of Christ the Redeemer, overlooking the sea and only 4 km from the historic center of Maratea...

Maratea is a municipality located south of Potenza in the Gulf of Policastro, Basilicata, and is one of the main tourist localities of this region. It is known as the "pearl of the Tyrrhenian sea" for the beauty of its artistic, natural and religious patrimony. Maratea, inhabited since the Prehistory, was dominated by the romans and, during the middle age, it started to gain importance thanks to its harbour.

Its territory is mainly hilly and mountainous. The coast is 32 km long and full of inlets, with 132 grottos and beaches covered in pebbles. Along the southern coastline, only 500 meters off the coast, there is the Santo Janni island, an underwater archeological site among the most important marine areas of the Mediterranean: it is inhabited by the protected species of the Drago di Santo Janni, a dark-brown/blue lizard.

Maratea is also called "the city of the 44 churches" because of the numerous churches, chapels and monasteries (bulit in different ages and with different styles) scattered across its territory.