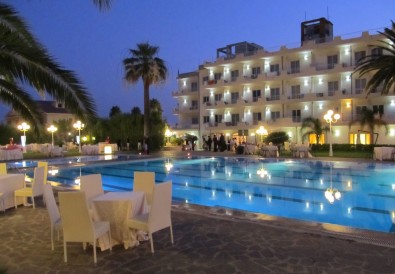 Located directly on the sea of Roccella Jonica, the Club Hotel Kennedy is only a few meters far from the beach with sand and pebbles. The Hotel has 80 rooms with a maximum of 4 beds, two beautiful ...

Roccella Jonica is located in Reggio Calabria, on the Costa dei Gelsomini and probably on the ruins of the greek city of Amfissa. It is about 110 km far from Reggio Calabria and 80 km from Catanzaro. In 2014 it was awarded with the five sails of Legambiente and in 2016 it won a "bandiera blu" and a "bandiera verde" for its wonderful ionian-sea waters.

Many events are organized in this city every year: the festival of Maria Santissima delle Grazie, protectress of the sailors, on the first sunday of july; the white night festivals on the 14th august with shows, concerts, street artists and gastronomic stands; the "Ncrinata 'I Pasqua", the meeting between the Virgin Mary and the resurrected Christ on the Easter morning. Roccella Jonica has a rich gastronomic tradition characterized by local wines, sausages, fish-based first dishes, desserts and oil.

The town's origins are ancient and dated back to "Magna Grecia": Roccella Jonica was also mentioned by Ovidio in his poems. It owes its name to its peculiar position on a rock: it was an important feud and defensive fortress on the coast that protected the land from the saracenic invasions. Roccella Jonica is full of interesting monuments and places worth visiting: the ruins of the "Medieval citadel"; the sighting tower known as "Torre di Pizzofalcone"; the Castello dei Carafa; the Chiesa Matrice; the church of Santa Anastasia; the sanctuary of Madonna Santissima delle Grazie; the church of San Giuseppe; the church of San Sostene; the Teatro al Castello; the Colonne Melissari; historical palaces like Palazzo Baudille, Palazzo Congiusta, Palazzo Englen and numerous villas.