The charm of the most remote areas of Italy 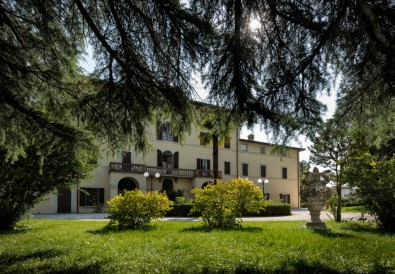 The Hotel Alla Posta Dei Donini is an elegant period building that will guarantee its guests a relaxing stay surrounded by refined classic furnishings.

San Martino in Campo is a fraction of the municipality of Perugia (11 km distant) situated in an alluvial plain, on the right bank of the Tevere river.

Monuments and art
The Castle of San Martino (fourteenth century) - quadrangular plan and four corner towers. What is left of this building is now included in the parish and in some private houses.

The Church of "Madonnuccia Ciribifera" (thirteenth/fourteenth century) - an ancient oratory in the countryside. Decorated with frescoes attributed to Andrea d'Assisi (also known as "Ingegno"), Perugino's pupil.

The Oratory of the Corradini (1616) - small chapel near the Tevere river.

Villa Donini (eighteenth century) - built by the powerful Donini counts, a rich bourgeois family from Florence that moved to Perugia to receive the honors. This neoclassical building was their countryside residence. Its internal spaces and the private chapel are decorated with frescoes by the painters Giuli and Appiani (eighteenth century) while the garden, still surrounded by the original walls, is characterized by centuries-old trees.

The Donini counts' hunting ground (1760) - built by the Donini family with bricks, 6 central pillars and cross vaults on the ground and the first floors. It still shows the typical eighteenth-century ornamental design and traces of the original lime plaster. Back then, it was the highest building of southern Perugia (16 meters high). Now, it is an accommodation facility.

The Parish (1866), built with a fifteenth-century style -  inside the parish there is a painting of the "Madonna col Bambino (fifteenth century) and a Kemper pipe organ with 1420 pipes (1952).