City of sweets and art 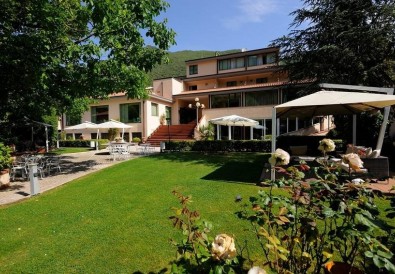 The Guesia Village Hotel & Spa is located 500 meters on the sea level in the wondeerful Menotre Valley, the green heart of Umbria. It is situated in a strategic position near the main tourist destinat ...

Perugia, city of sweets and art, is the regional county seat of Umbria and is characterized by etruscan walls and a medieval historical center. It is also an important cultural center since it hosts two universities: the University of Perugia, founded in 1308, and the University for Foreigners, the most important one of Italy.

The ancient Perugia is surrounded by two walls: the external wall is dated back to the middle age and is characterized by numerous doors like the "Cassero di Porta Sant'Angelo"; the internal etruscan wall is characterized by big boulders. Nevertheless, there are very few monuments left of the ancient city as the urban center is almost completely a medieval district. In fact, Perugia's historical center is a real fourteenth-century hamlet, one of the most beautiful hamlets of Italy.

The gothic Basilica of San Domenico, preceded by the gate of San Pietro. Inside the chuch there are precious statues and works of art (like the wooden choir) by laudable artists. The cloister and the convent of this complex host the National archeological museum of Umbria.
Piazza Matteotti square, with the fifteenth-century building of the Ancient University and the palace of Capitano del Popolo.
Piazza IV Novembre square, one of the most important squares of Italy with the gothic Palazzo dei Priori, symbol of the civil power, the cathedral, symbol of the religious power and, at its center, the thirteenth-century fountain fed by the waters of Mount Pacciano carried by the aqueduct. Palazzo dei Priori hosts the National gallery of Umbria that collects precious works by local artists. Among these works of art there are the Polyptych of Sant'Antonio by Piero della Francesca and the Polyptych of San Domenico by Beato Angelico.

Perugia also hosts numerous events and internationally famous festivals such as the Eurochocolate, during autumn, and the Umbria Jazz, every year after mid-july. The entire city center is extremely lively during the Umbria Jazz: little clubs, theaters, streets and squares are pervaded by a magical atmosphere where music blends with the city's history and architecture. Many shows and concerts follow one another every hour of the day, from midday until late night.
Perugia is more than a simple medieval hamlet, it is also an extremely innovative city. In fact, it was the first italian city to build escalators that connect different spots of the city to the center that, in this way, can be easily reached by foot.